Commonly used pain medication for osteoarthritis doesn’t actually reduce inflammation and has  unwanted side effects such as kidney or liver damage. The pain relieving properties of tart cherries have been show to be effective for the relief of pain associated with osteoarthritis without the side effects of conventional treatments.

A 2007 study revealed that pain and function improved significantly in osteoarthritis of the knee patients when they were given tart cherries in supplement form for 8 weeks.

The study participants included twenty  40 to 70 year old women experiencing at least moderate osteoarthritis pain. They consumed 10.5-ounces of tart cherry juice or a placebo cherry drink twice daily for 3 weeks. There was a statistically significant reduction in inflammation among those individuals who consumed the tart cherry juice, which was indicated by reduced C-reactive protein levels. The reduction in inflammation was greatest for individuals who had shown the highest levels of inflammation at the beginning of the study.

Cherries are a natural pain reliever. Researchers have found that anthocyanidins from cherries have the ability to block both COX-1 and COX-2, enzymes considered to cause pain. Of all the fruits which were tested, cherries had the highest amounts of key anthocyanidins. The COX-inhibitory activities of the anthocyanidins in cherries were even found to be comparable to those of naproxen and ibuprofen.[18] 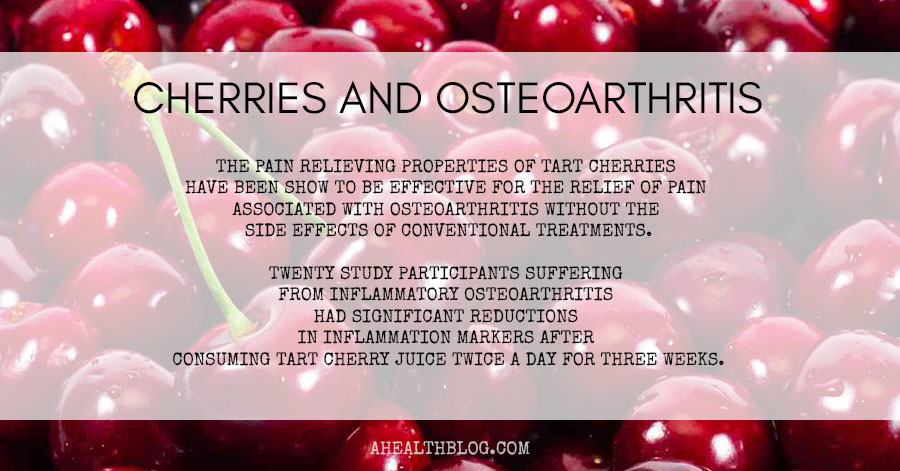