According to research, regular green tea consumption may protect the brain from Alzheimer’s as well as other kinds of dementia. The research also indicates that this ancient Chinese beverage can play an important role in cancer prevention.[1] Green tea has been made use of in Traditional Chinese medicine for centuries and the research provides the scientific evidence why it could be effective against some diseases.

The researchers wanted to know if the green tea’s protective properties, which are present in the, freshly brewed and undigested form of the beverage, were still active after the tea had been digested. There are some chemicals in foods which are known to be beneficial, but whether these foods are actually of benefit depends on what happens during the digestion process.

Digestion is an important process that provides the nutrients that are needed for survival. But just because some of the food we consume has been established to have health enhancing properties, we cannot assume the compounds in these foods are ever going to be absorbed by the body.

A protein known as beta-amyloid and hydrogen peroxide are two compounds that play an important role in the development of Alzheimer’s.

Other research has shown that compounds called polyphenols, found in green and black tea, have neuroprotective properties, which bind with the toxic compounds and protect the cells in the brain.

After ingestion, the polyphenols are broken down and mix of compounds is produced, and it was these compounds the researchers tested.

The researchers discovered when green tea is broken down by gut enzymes, the resulting chemicals are in fact more effective against the main triggers of the development of Alzheimer’s compared to the undigested form of the tea. They also discovered the compounds had anti-cancer properties, substantially slowing down tumor cell growth. 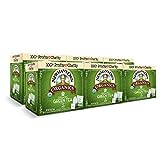