Nursing is a very rewarding career to enter. There are plenty of opportunities out there for those with a nursing degree. Plus, you get the satisfaction of knowing you’re helping people, whether it’s saving a life or merely assisting someone in learning how to use their diabetes medication.

Nursing is a field that always seems to be in demand. In fact, the Bureau of Labor Statistics (BLS) states that there were 2,737,400 jobs for nurses in the U.S. as of 2010. The BLS projects a 27 percent growth in the field of nursing from 2010 until 2020. This is faster than the average for all occupations. Although it appears there is a increasing need for individuals with a nursing education, some states are in more need than others.

1. California
California is a West Coast state with plenty of opportunities for nurses in nursing homes, hospitals, outpatient care centers and physicians’ offices. In fact, California ranks No. 1 on the BLS’s list of states with the highest employment level. The statistics indicate that there were 249,980 jobs for nurses in California. It’s also known as the top-paying state as well. The Los Angeles/Long Beach-Glendale region make the BLS’s list of metropolitan areas with the highest level of employment. All of the top-10 highest paying metropolises in the U.S. are in California.

2. Texas
Texas is oftentimes associated with hardcore conservatives. This isn’t exactly true. Much of Texas is known for oil, the Cowboys, for being large and for its barbeque. It’s also an ideal place to start a nursing career, since it earns a second-place spot on the list of states with the highest level of employment. As of 2012, there were 187,290 positions for nurses in Texas alone. The metropolitan areas of Houston and Dallas are both on the list of metropolitan areas with the highest employment levels.

3. New York
The state of New York has been associated with Broadway and other attractions. It’s a busy place for business, and its high population makes it an excellent location for a nurse to work. BLS statistics indicate that there were 166,950 positions for nurses as of May 2012. The New York-White Plains-Wayne region is credited as the No. 1 metropolis for the highest employment level, having 92,060 jobs in that area alone as of May 2012.

4. Florida
“The Sunshine State” has warm weather, palm trees, beaches and plenty of outdoor recreational activities. It’s also an excellent locale to begin a career or continue as a nurse. This is because Florida had 163,720 jobs for nurses. This number was counted back in 2012, and since the job growth rate is expected to rise, you can only imagine how many jobs there will be for nurses in the next few years. Gainesville is a metropolitan area ranked as one of the top metropolises for the highest concentration of jobs.

5. Pennsylvania
Pennsylvania was once a state known for Pittsburgh, a city that was filled with steel mills. Today, the state is known for beautiful scenery and as the place where the Declaration of Independence was signed. With over 125,000 jobs for nurses as of 2012, it’s also an excellent location for nurses. The Philly area makes the list as one of the metropolitan areas with the highest employment level. In fact, it ranked as No. 4 on the BLS’s list.

These states are the best states for employment for nurses. You may want to pack your nursing Landau scrubs and move to one of these locations for employment. 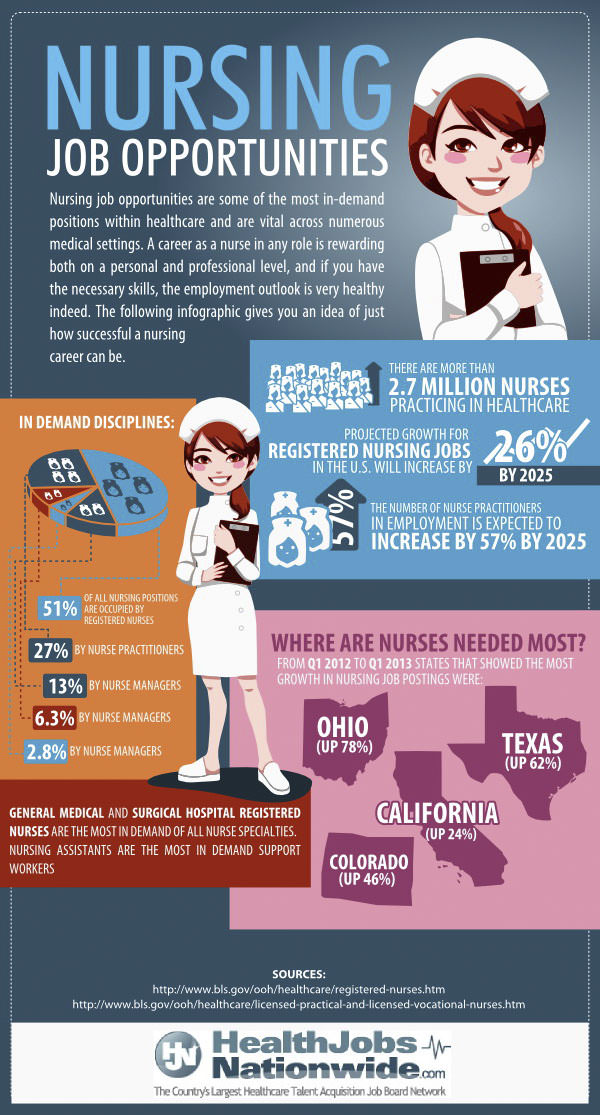