Research has revealed that protein drinks help individuals build stronger muscles compared to those who consume carbohydrate drinks. The study shows that what an individual drinks immediately after exercise plays an important part in maximizing the effects of exercise. The study reveals that consuming protein drinks following aerobic activity increases the training effect after 6 weeks, in comparison to carbohydrate beverages. Also, the research indicates that this effect can be had using only 20 grams of protein.1✅ JOURNAL REFERENCE
DOI: 10.1096/fj.11-186437

The researchers recruited 16 individuals age 37 and older and they exercised on treadmills for 45 minutes 3 times per week for 6 weeks. Following each exercise session, 1 group received protein drinks and another group received carbohydrate drinks. To determine the generation of new muscle structures, metabolic pathways were measured making use of heavy water labeling.

Individuals drank heavy water, which becomes incorporated into numerous synthetic processes making it possible for measurement of the rates at which different muscle components are being generated. Making use of ultra-sensitive mass spectrometry methods, researchers took muscle samples after the 6 weeks and could establish how much of the muscle and its component pieces were new. In this case, DNA, new proteins, and membranes were measured. This indicated that endurance exercise leads to positive changes in skeletal muscle structure. 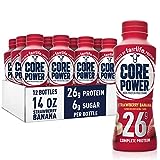