The researchers gathered information on the dietary consumption of vegetable and fruit juices of 1,836 individuals who were free of dementia. Cognitive function was then assessed every 2 years for 10 years. After possible confounding factors such as education, smoking, fat intake and physical activity were taken into account, it was revealed that individuals who had consumed juices 3 or more times each week were 76% less likely to get signs of Alzheimer’s compared to individuals who consumed less than 1 serving each week.

The benefit seemed to be particularly pronounced in individuals with the apolipoprotein E-e4 allele, a genetic marker associated with late-onset Alzheimer’s, which usually happens after the age of 65, and is the most common type of the disease

It was originally suspected that high antioxidant vitamin intake may offer some protection against Alzheimer’s, but recent research hasn’t supported this theory.

The researchers considered that the primary component might not be vitamins, and suspected that another type of antioxidant chemicals called polyphenols could play a part. Polyphenols are antioxidants commonly found in the diet and particularly rich in juices, teas and wines. The majority of polyphenols can be found primarily in the peels and skins of vegetables and fruit. Recent research has revealed that polyphenols, such as resveratrol in wine, can increase maximum lifespan by 59% and delay age related decay of cognitive function in animal models.

Cell culture and animal studies have also confirmed that certain polyphenols from juices demonstrated a stronger neuroprotective effect when compared to antioxidant vitamins.

The antioxidant capacity and phytochemical levels of fruit juices are significantly influenced by juice extraction techniques, and it’s important to choose a good quality juicer. 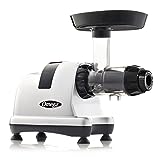