This research expands on earlier studies that show the benefits of rosemary in improving memory function. A number of tests for measuring cognitive performance that focused on memory were carried out by the researchers.

The tests were created for evaluating the capability of the study participants to retain as well as manipulate information. Over several tests, the participants drinking rosemary extract saw a marked improvement in the ability for recalling information and completing cognitive tasks.

The study participants in the test group were provided 250ml of the concentrated rosemary extract. Twenty minutes after drinking the rosemary extract, the test group had their brain blood flow measured while carrying out the tasks to evaluate how effectively the body was extracting energy in comparison to the control group.

Individuals consuming rosemary extract experienced an average 15% increase in cognitive performance in addition to an increase in deoxygenated red blood cell levels flowing through the brain. This suggests that the brain is extracting the energy it needs to perform the task more effectively.

This study adds to a collection of previously conducted research indicating that rosemary provides a variety of potential health promoting uses.

It’s believed the rosmarinic acid and 1,8-cineole which are found in rosemary extract could contribute to improved cognitive performance.

Rosemary has been renowned throughout history for its therapeutic properties and its memory improving ability. Its power and benefits are widely acknowledged from the latter day alchemists to modern day aromatherapy practitioners. 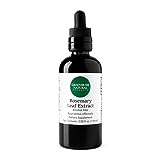